12d Track allows users to calculate the centre of a track of surveyed rails, get a ‘Line of Best Fit’ to develop and alignment, calculate and plot slews, output slew diagram and reports/spreadsheets, product a rail profile, create and edit turnout sets, place and edit turnouts, and more!

Many of our users have utilised 12d Model on a variety of interesting rail projects over time (some using 12d Track, and others using other modules such as Detailed Alignment Design, 12d Field, and even the Drainage capabilities). Some of the highlights have included:

When opened, this new light rail service will run from Circular Quay, all the way up the main street of Sydney CBD – George Street – and east into Randwick, where a major university is located.

It’s a very complex project given all the underground services involved, and all the existing infrastructure surrounding the route.

12d Model’s BIM capabilities have been invaluable to the designers on this project. The feedback from the design team was that this simply could not have been done without this functionality. 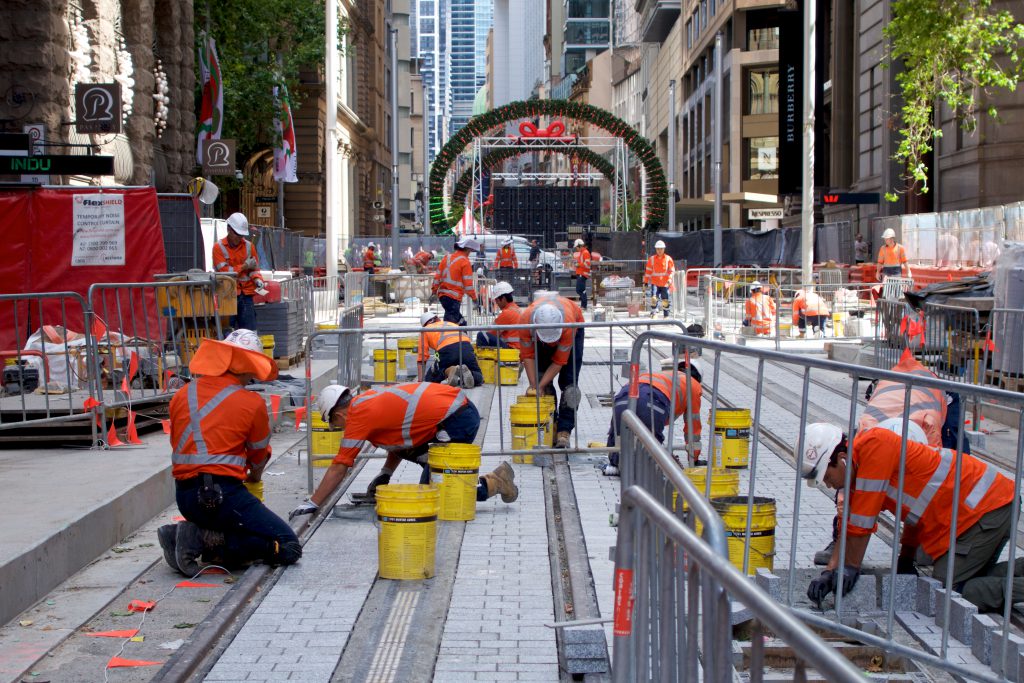 The team behind this project utilised 12d Model very innovatively.

The main aim of this project was to remove the need for freight trains travelling south from Newcastle to cross over onto commuter lines and causing delays.

The project involved the construction of a new rail underpass at North Strathfield in Sydney’s west. The underpass consists of two dive structures and a shallow driven N.A.T.M. type tunnel running beneath existing operational commuter and freight railway lines.

The key project requirements were to verify the thickness of the shotcrete (primary structural support for the tunnel), and to design and implement a 24/7 automated system to measure track deformations.

The NSRU team found that while there are commercially available solutions designed for tunnel surveying applications, these do not allow a thickness to be computed in the field, make accurate comparisons to points’ rough or jagged profiles, or make comparisons directly to previously surveyed points…enter 12d Model! Mick Gunter at 12d Solutions in Sydney worked closely with the NSRU team to help tailor 12d Model with 12d Field to their needs and make the project a success.

Dave Mares (Alliance Survey Manager) said, “12d Field exceeded their expectations on this project, and its features surpassed the overseas software traditionally used for this type of project”.

The GCRT Project comprised a 13km light rail system between the Gold Coast University Hospital on Parklands Drive in Southport and the Broadbeach South Station adjacent to Pacific Fair Shopping Centre. The Project brought together the world’s best infrastructure and urban design solutions to create a vibrant and bold future for the City.

The decision was made to produce the design in 12d Model to enable all relevant disciplines to work from 12d and utilise the model sharing capability. Doing this would enable a truly coordinated approach to the multi-disciplinary design. The teams involved worked closely with 12d Solutions, who helped tailor 12d Model software to suit their complex needs.

It was necessary on this project to have plotted cross sections showing rail design formation with the track infrastructure correctly displayed. This meant having the ballast, sleepers and rail profiles shown in all cross sections, but on the correct cant at the horizontal curves.

It was also important to be able to calculate the exact ballast depths under the sleepers at both (high and low) rail locations. This value was critical as all the loads of the train were directly bearing under the rail foot, and the minimum designed depth needed to be maintained. Axle loads in the Pilbara in Western Australia on heavy haul rail are reaching up to 40-tonne limits.

Despite the many difficulties involved in such a complex project, the use of 12d Model with 12d Track on the Adelaide Hills Rail saved time and money, and assisted design processes greatly.

Fortescue Metals Group (FMG) undertook a $US8.4bn expansion program to triple the size of its operations and take it to 155 million tonnes of iron ore per annum by mid 2013. FMG had a triplication of their rolling stock fleet. To meet the demand and the growth in associated maintenance procedures, an expansion of their existing facilities at Rowley Yard, Port Hedland was required.

20 options were investigated using the powerful ‘element method’ tools within 12d Model’s Super Alignment, with the turnout placement function providing a quick and effective method to arrange track layouts. Storm water drainage design was developed in 12d Model. Three options were investigated, limiting pipe sizes to 900, 1200 & 1500(mm). A cost/benefit analysis was completed that compared pit and pipe quantities and thrust boring sites. With the site 1600km away from the nearest pipe supplier, this decision was critical to logistics planning. “Using 12d to design this solution saved more than $AUD2million in capital costs for the project.” The storm water drainage design was independently verified. Diversion drains were mapped in 12d Model using the HEC RAS writer. Importing the water surfaces from HEC RAS to 12d Model was used to then calculate tail water conditions.

“12d modelling isn’t just a click of a button. It often takes many attempts to find a solution to a problem. In a brown field environment, where little planning had been done in the past…issues were constantly faced. “It seemed that everything we touched was broken and every solution we tried to implement failed. This led to blowouts in the delivery, but we are very happy with the result thanks to 12d Model and its vast array of tools.” —Chris Compton, Fortescue Metals Group

All design and construction work associated with the $200M project was undertaken by the Tracksure Joint Venture, which primarily comprised the John Holland Group, Coleman Rail and York Civil.

Quick and accurate measurement of drainage quantities was a critical issue for the Tracksure construction team, for both pricing and procurement purposes.

The Tracksure construction team was appreciative of the high standard of drainage scheduling information which was able to be provided during the project. The team members had been advised that their demonstrated process would be adopted on future projects as an example of high quality presentation and documentation.

An independent 36km freight line running adjacent to the existing commuter line, known as the SSFL – Southern Sydney Freight Line. Construction of this project would enable the passenger and freight services to operate independently.

Being in the rail corridor, there was a vast array of underground services. Geo Image Services was also continuously working in very close proximity to the existing commuter line, major overhead wiring, and all existing infrastructure, Gantries, signalling equipment, etc.

By using 12d, they were able to create instant Cross/Long Sections in relation to the design and the existing commuter line throughout the project. In the field, the were able to assign attributes to the services surveyed for clarification in the office at a later date.

At the end of the first stage of the project, they were even able to create a 12d Model Visualisation using the design, As-builts, and the general topographical information collected during the three years.

New city rail services from Glenfield to Leppington in NSW (GLRL project). The project involves the design of about 10km of rail track including earthwork, buildings, stations, roads, bridges and all the relevant power and signal services. GHD received the previously designed rail and surface tin, and was then involved in modelling the cables consisting of high-voltage cable, signal, and communication conduits running along and across the rail corridor.

The various cables were modelled as conduits arranged in combined configurations running inside the different sizes of trenches. There were several hundred pits of various sizes for cable pulling and changes in directions. There were trenches that went across and under the railway (called ULX) and also cables above the ground placed inside galvanised service troughs (GSTs).

The use of 12d Model on this project has enabled on-time completion and satisfied client requirements. Although no complicated macros were used, the application was innovative, particularly in draping 3D pits, auto updates of chainages and creating templates using Excel/UltraEdit.

This Rail Revitalisation project in South Australia was part of the state’s $2.6 Billion upgrade to public transport services. The survey aspect of that involved over 110 kilometres of Adelaide’s metropolitan rail network.Using a GPS camera, the team added images and site photos into 12d Model in an automated process to supplement a standard survey model with information that would not be practical to key in as text.

Using the CAD Insert Image command to insert a JPEG into a 12d Model project allowed them to set a precedent for other images to follow – the first image was inserted as a sample only, with the manual process needing only to be done once.
Adding attributes to the point/inserted image allowed for attributed information either pertaining to or extracted from the image to be associated with the vertex.
Exporting the model with the sample image provided a base for the mail merge to be set up.

GPS-Photo Link camera software facilitated a CSV Export of the images with their associated coordinates and attributes.
Any attribute columns that needed to be populated manually were added, and needed to correspond with the field names in the 12d ASCII file, as created previously.

The mail merge document was created, merging the repetition of the single point, with a JPEG appended for each field photograph and creating a model of points for each.

Initially, photographs were used to remove large quantities of text from the survey model, avoiding lengthy descriptions of assets cluttering the view. The uses for this quickly grew to include:

This ambitious project set out to double the capacity of the rail network in Auckland, New Zealand. When this was in the planning phase, it was determined that the city was expecting to grow by an extra million people over the ensuing five years – this created a vital need to plan to reduce congestion. High quality public transport has been shown to be one of the most important parts of a plan such as this. Rail moves three times as many people as buses, and ten times as many as motorways!

Prior to this section of the wider project, Auckland had implemented double tracking of rail systems as well as lots of station upgrades. They needed this inner city rail link to expand the full rail network. Electric trains are an important part of this plan.

This project is critical to all public transport users (with a flow-on effect to drivers) in and around Auckland’s CBD. Two tunnels are being built – Britomart to Eden Terrace (3.5km). The safety of commuters and workers has always been paramount in this project.

The main benefit when this is finished will be to double the number of people with access to the Auckland CBD in 30min or less.

12d Model has been integral to this important project.